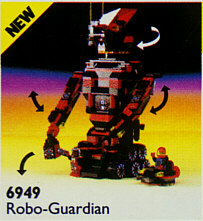 As a kid, this was my absolute favorite Lego set that I owned. 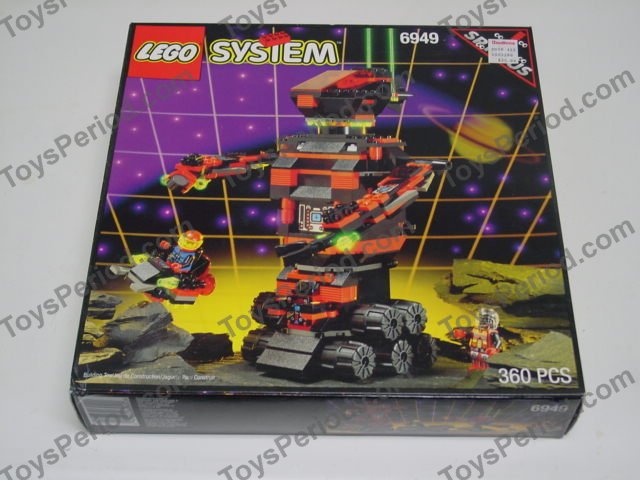 I’ve always been a huge lefo of giant robots, and this was easily the coolest of the era. Owing to their name, the Spyrius focused on interstellar espionage rather than combat. Many sets focused on collecting and transporting small “data pad” tiles.

The Robo-Guardian is no exception to this, as we’ll soon see. A rear shot of the Robo-Guardian reveals the presence of a small scout craft hidden in the upper torso and a Spyrius Droid in 69949 lower torso.

As the robot rolls along a flat surface, the top wheels make just enough contact with the set on the bottom to roll along with them albiet in the opposite direction.

It looks great in motion. While not exactly highly-articulated, the Robo-Guardian can emote a bit! The head can swivel a full degrees on a turntable piece. In addition, one can clearly see the differences between the robot’s arms.

The right arm features a magnet, while the left arm is equipped with a claw. The gimmick for the shoulder movement is rather clever. An ingenious locking mechanism allows the shoulders to “ratchet” all the way up to an upright position. The arms can also bend inward at the elbow. The ratchet mechanism only works one way, and forcing the arms down could damage the parts. 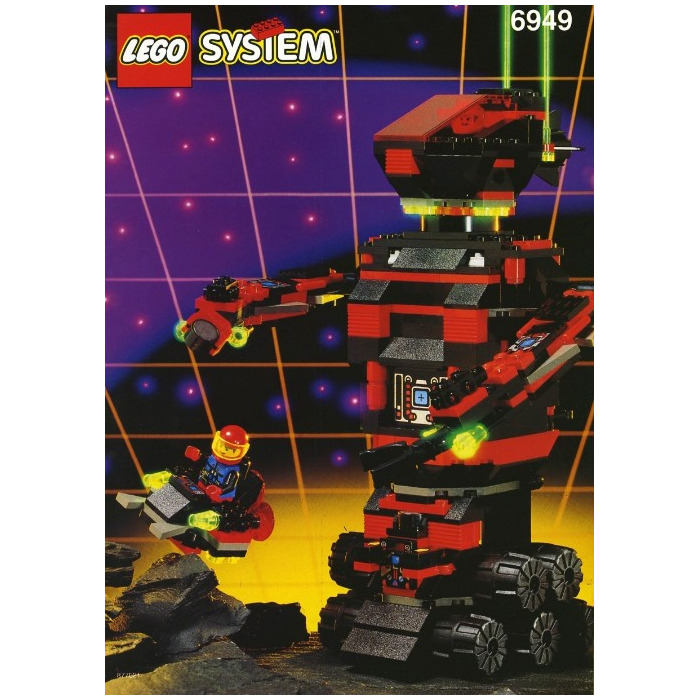 Perhaps in addition to storage, the container can decode and decrypt the information stored on the data pads. A magnet is fixed to the top of the container as well.

Here the container has been opened, and the data pads removed. The special prints are delightfully sci-fi. One can insert the pads with the container open, but it’s more fun to slip them through the tiny slots on the front and rear of the container instead. Here the Robo-Guardian is carrying the data pad container via its magnetic “hand”.

Unfortunately the arm isn’t quite long enough for the robot to store the container by itself. As mentioned earlier, the Robo-Guardian has a unique one-way shoulder ratcheting lock for its arms. To release the lock without fully rotating the arms, simply lift up on the corresponding red antenna poking out of the back of the robot.

This will unlock the shoulder joint and allow the arm to swing back down to a neutral position.

Mentioned previously is a small scout craft that can be tucked away in the upper torso of the Robo-Guardian, accessed from the rear. A pair of small arms with clip hands keeps the craft secure. The easiest way to remove the scout craft is to simply pull it out by grasping the gray protrusions at the front. The arms will fold out to release the vehicle. Here is the scout craft itself.

Piloted by a Spyrius Astronaut, it has a pleasant shape. A Spyrius data pad is used to control the vehicle. It seems they have a multitude of uses, beyond securely storing data. Could the trans-green cones be blasters, or simply headlights or sensors? The rear of the scout craft.

Three trans-red dishes provide forward propulsion, while small trans-green round plates on the bottom provide vertical thrust. A Spyrius Droid sits safely in the bottom compartment of the Robo-Guardian. A bazooka-like blaster or long-range camera? Flipping the ladder up allows access to the Droid within.

Displaying a very interesting gimmick, the head and lower arms of the Robo-Guardian can be removed and reconfigured to form a medium-sized flight-capable craft. Perhaps this is an escape vehicle.

The magnet arm would allow this craft to carry the data pad container to safety. As for defenses, the four backwards trans-green cones could be blasters. A rear view of the head flyer. The black rocket booster element provides forward thrust. Like the scout craft, the trans-green round plates provide vertical thrust.

With the Head Flyer off on its own, the main body of the Robo-Guardian can still be controlled. The scout craft can function as a secondary head when attached. It even has a somewhat head-like appearance, with the trans-green 649 serving as “eyes”.

Presented here are the three minifigures included with this set. In the center is the Spyrius Chief, presumed leader UK fiction notwithstanding of the crew, with a Spyrius Astronaut on the left and a Spyrius Droid secret leader?! The Chief and Astronaut are identical save leggo their face prints and a special print on the Chief’s helmet.

The Droid is quite awesome, and is the first robotic minifigure in all of Leego Space. And here are the Spyrius busy at work. The Droid scans a faraway target with the scope of his “bazooka”.

The Chief reads information stored on a Spyrius data pad, while the young Astronaut stores his data, pad in the nearby container. For me, the Robo-Guardian is the jewel of the Spyrius line. It is leo excellent, towering, rock-solid robot build with an imposing look and fun gimmicks. A truly stellar “villain” set and one I’m glad to own again.

I hope you’ve all enjoyed taking a look taking a look at it with me. You need to be a member in order to leave a comment. Sign up for a new account in our community. Already have an account? Posted February 7, Swinging the arms out in the direction of the arrow plates unlocks the container.